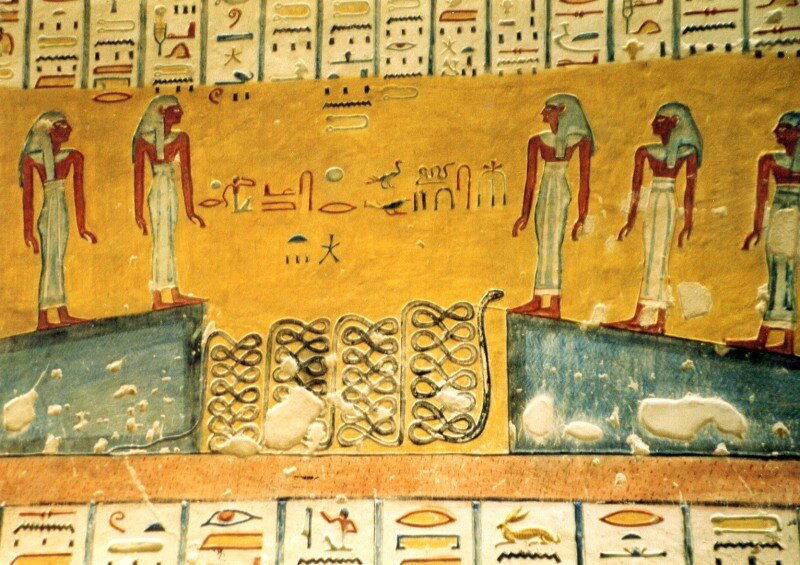 Tomb KV2 is the tomb of Ramesses IV and is located low down in the main valley, between KV7 and KV1.  The tomb of Ramesses IV is rather different than most other royal tombs built here. Ramesses III had been assassinated, and when his some, Ramesses IV took the throne, he did so in a period of economic decline in Egypt. Though large, his tomb is highly simplistic, and unique in many ways. 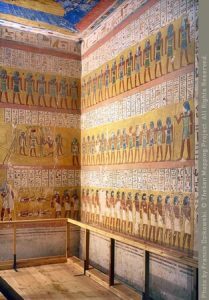 The tomb was known early on and was in fact used as a sort of hotel by early explorers such as Champollion and Rosellini (1829), Robert Hay, Furst Puckler, Theodore Davis, and others. It was also an important Coptic Christian dwelling and was also frequently visited in antiquity. There were considerable Coptic and Greek graffiti on the tomb walls. 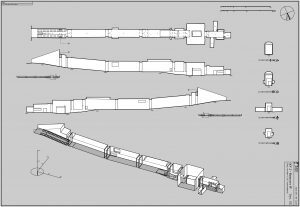 The original plan of the tomb was altered after the death of the king, and the chamber which would have been pillared chamber F was used for burial chamber J. Two plans of the tomb are known: a plan of the whole tomb drawn on a papyrus now in the Turin Museum (Cat. 1885), and a sketch of the doorway of the tomb on an ostracon found in the rubble at the entrance.

Noteworthy features: Notable architectural features of this tomb include: the barrel-vaulted ceiling of corridor D; the ramp through the floor of corridor D, gate E, and chamber E; the conversion of a pillared chamber into a burial chamber; side chambers and recesses off the rear corridor K. Also unusual are the number of foundation deposit pits, although not all were used.

Decoration unique to this tomb includes the representation of Shu and Nut from the Book of Nut on the ceiling of burial chamber J, the mummiform figures in Ka and Kc, and parts of the Book of Caverns, which appear for the first time in the Valley of the Kings.

KV 2 is one of the few tombs for which an ancient plan has survived.

The tomb was frequently visited in antiquity, and graffiti are scattered throughout the tomb. In general, each visitor left his name, his profession, his origin, and personal comments about the tomb. There is a significant number of Coptic graffiti, including representations of saints and Coptic crosses.

KV 2 has been open since antiquity. There are over seven hundred Greek and Latin graffiti throughout the tomb. Over fifty Coptic graffiti show that the tomb was used during the Byzantine Period. During the first half of the nineteenth century, the tomb was often used as a dwelling by European explorers investigating the Valley.

Conservation history: Recent work by the Egyptian Antiquities Association/Supreme Council of Antiquities included in-filling of cracks and holes in walls and ceiling, the cleaning of painted decoration, the installation of new lighting, wooden walkways, and glass panels.

Site condition: KV 2 was spared floodwater damage, and the painted decoration on the walls is well-preserved.