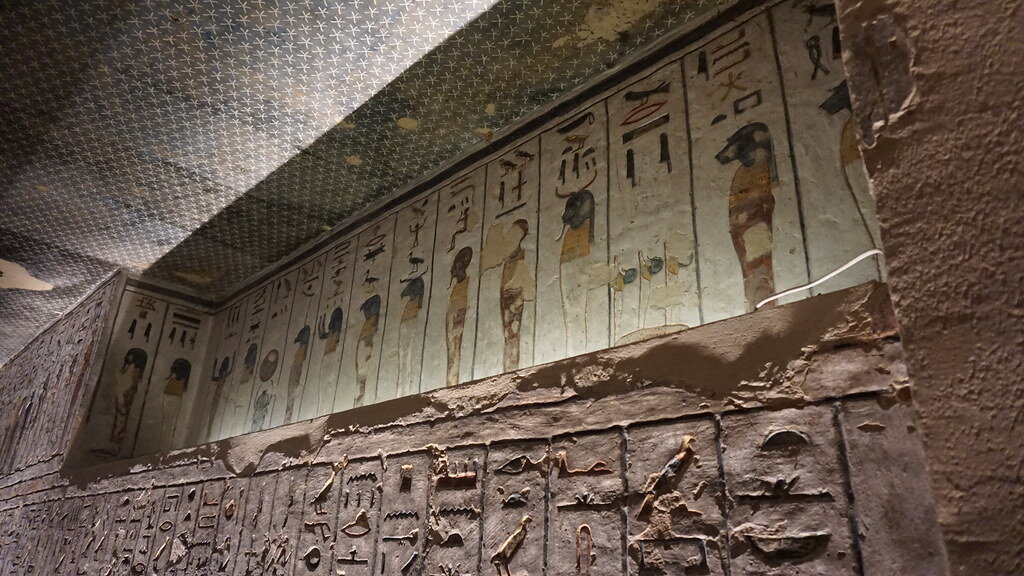 KV 11 is the tomb of Pharaoh Ramesses III. Located in the main valley of the Valley of the Kings, the tomb was originally started by Setnakhte, but abandoned when it broke into the earlier tomb of Amenmesse (KV10). Setnakhte was buried in KV14. The tomb KV11 was restarted and extended and on a different axis for Ramesses III, who was buried here after his murder. 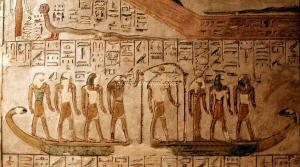 KV 11 is located off the main wadi. The plan of the tomb begins with an open entryway (A) followed by two corridors (B and C), one with two side chambers (Ba-b), the other with eight chambers (Ca-Ch). Beyond the second corridor, the cutting of a third corridor (D1a) on the axis of the tomb broke through the ceiling of KV 10. The right wall was cut further to the west, transforming the corridor into a chamber (D1). A continuation of the corridor D2 with its axis shifted to the west and not parallel to the previous axis, has a floor inclined upwards to avoid collision with KV 10. This corridor is succeeded by well chamber E, which is only partially cleared, a pillared chamber (F) with a side chamber (Fa) and central descent, another corridor (G), two square chambers (H, I), a large burial chamber (J) with four side chambers (Ja-d), and three more small chambers beyond (K1, K2, L).

Site History: The first three corridors of KV 11 were begun for Setnakht, but abandoned when the cutting of the third corridor broke into another tomb (KV 10). The tomb was subsequently completed by Ramesses III, who added the side chambers to corridor C and finished the tomb through chamber L. After his burial was disturbed, the mummy was reburied in the cache in TT 320, and discovered in 1881. The tomb has been partly accessible since antiquity.

In 2019/2020, first measures to restore the tomb’s rear was undergone by The Ramesses III (KV 11) Publication and Conservation Project in order to develop a plan for conservational treatment.

In 2021, a massive iron beam construction was inserted behind pillars 1 and 3 in the burial chamber to protect the ceiling from collapse. Parts of the vulnerable wall decoration on plaster were secured, pillars stabilized, and the damage mapping continued as part of a collaborative effort between German and Egyptian conservators in the project.

Site condition: The color of the painted sunk reliefs is well preserved in most of the tomb, but the chambers beyond chamber I have suffered from severe water damage, cracking of walls, and loss of plaster.

The severe water damage was caused by a number of flooding events within the Valley of the Kings. Dr. Anke Weber of The Ramesses III (KV 11) Publication and Conservation Project has compiled the following history of flooding within the Valley, as documented in meteorological data, graffiti, publications, notes, photographs, and drawings from antiquity until today.