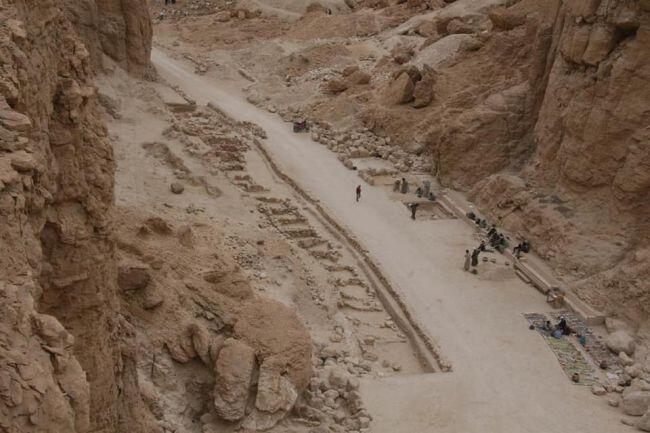 The Valley of the Kings, also known as the Valley of the Gates of the Kings is a valley in Egypt where, for a period of nearly 500 years from the 16th to 11th century BC, rock-cut tombs were excavated for the pharaohs and powerful nobles of the New Kingdom which includes the Eighteenth to the Twentieth Dynasties of Ancient Egypt.

Many would think that considering there has been so much work going on in the area, for so many years, that nothing new would come to light. But that isn’t the case. In fact, just this week, two mummies have been unearthed in Egypt’s Valley of the Kings, the cemetery holding the tomb of King Tut and other Egyptian royalty.

In addition to the mummies, archaeologists also unearthed several workshops, which reveal in greater detail the lives of the workers who built the majestic complex. The finds were announced Thursday. October 10, 2019, at a news conference.

One of the most important discoveries was a vast complex of workshops found in the western section of the Valley of the Kings, near the ancient city of Luxor. The complex includes workshops used to color pottery, manufacture furniture, and clean gold, team leader Zahi Hawass, a former Egyptian minister of antiquities, said at the news conference.

It’s just amazing that after all these years we are still uncovering new things in Egypt. 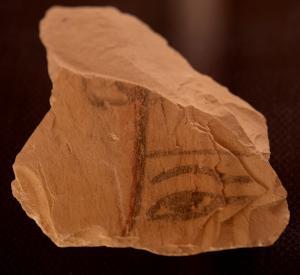 A limestone fragment discovered at a new excavation site at the Valley of the Kings.

Near the workshop complex, archaeologists found an area 16 feet long that was dug into the valley and that may have been used as a cachette (a place to store items), Dr. Zahi Hawass said. This site yielded the remains of numerous items, including remnants of onions, figs, linen, rope, and bits of material left over from mummification. Archaeologists also uncovered a piece of wood that is about 3 feet long which looks like a two-pronged fork. A hieroglyphic inscription on it says “lord of the two lands.” This unusual artifact may have been used like a dolly or forklift “to hold furniture to put it inside the tomb,” Hawass said.

Nearby, archaeologists found the remains of structures used to bake bread, make pottery and store water. They also found two rings, one of which is inscribed with the name of Amenhotep III, a pharaoh whose tomb is located in the western valley, and another ring that may have been used for a queen. Hawass said he hopes to find undiscovered tombs of the family members of Amenhotep III, King Tut’s grandfather, in future field seasons. 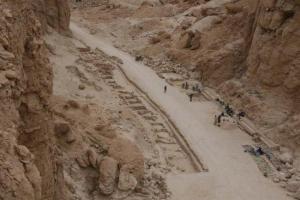 The archaeologists excavated several areas across both the east and west sections of the Valley of the Kings. (Image: © Egyptian Ministry of Antiquities)

In the eastern portion of the Valley of the Kings, the team found 10 inscriptions written on ostraca (pieces of pottery) near the tomb of Ramesses III, who reigned between 1184 B.C. and 1153 B.C.

While translation work is in progress, archaeologists can already tell that at least one of the inscriptions “is talking about the workmen who actually came to work at this site,” Hawass said.

Near the tomb of Ramesses VII, who ruled Egypt from 1136 B.C. to 1129 B.C., archaeologists also found the remains of 40 small huts, dating back around 3,300 years, that were essentially storage sheds used for the tools, the workmen used to build the tombs.

More discoveries were made near the tomb of Hatshepsut (KV 60), a female pharaoh, and include the remains of two female mummies, as well as several shabti figurines. Ancient Egyptians commonly buried shabtis, a type of figurine that looks like a human, with mummies believing that they assisted the deceased in the afterlife.

So just who are these two newly found mummies? Well, they aren’t sure just yet. All they know at this time is that they are female.

Section of the site in the East Valley.
Image: Egyptian Ministry of Antiquities

These discoveries will help archaeologists to learn more about the workers who built the tombs, Hawass said. And the discovery of new royal tombs may still be coming, they said.

“We hope that one day we can find [undiscovered] royal or private tombs” in the valley, Khaled al-Anani, Egypt’s antiquities minister, said at the news conference. “The excavation is [expected] to take more years.”

Other recently discovered items included a scarab ring, hundreds of inlay beads (including beads decorated with the wings of the Egyptian god Horus), and gold foil used to adorn royal coffins.

Excavations are ongoing in the West Valley in an ambitious attempt to uncover the tomb of Queen Nefertiti and her daughter, Queen Ankhesenamun—the wife of King Tut. The team is also hoping to uncover the tombs of three prominent pharaohs: King Amenhotep I, King Tuthmose II and Ramses VIII, reports CNN.

In the East Valley, Hawass’s team found a tomb, designated KV 65, which still contained some of the tools used for its construction. Excavations in the Valley of Kings were described as being the largest since the time of Howard Carter, the famous discoverer of King Tut’s tomb. These digs are happening near the tombs of Ramses VII, Hatshepsut, and Ramses III, according to Ahram Online.

Excitingly, the excavations in the East Valley near King Tut’s tomb resulted in the discovery of other artifacts, including 42 small huts used to store tools, noted the antiquities ministry. Here, the archaeologists also found some hieroglyphic paintings, fragments of carved tombs, and rings from the Ramesside period, which kickstarted the 19th Dynasty (1292 BCE to 1189 BCE).

It’s unreal how, after so many years of digging, Egyptian archaeologists are still able to uncover new tombs, structures, and artifacts. It’s a testament to the massive cultural footprint left behind by the ancient Egyptians.