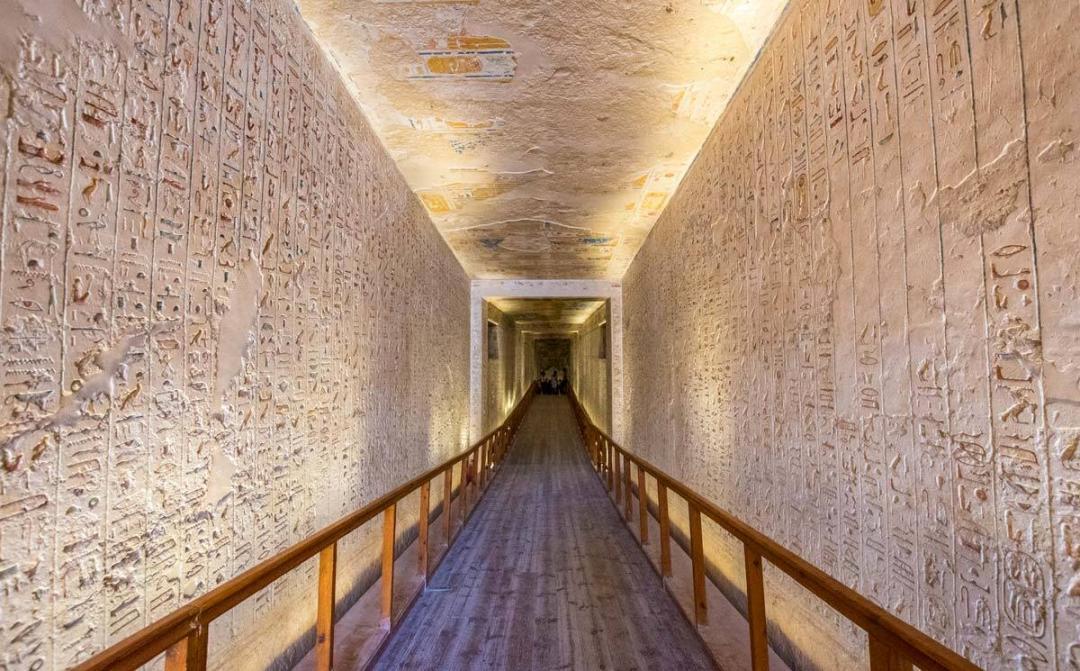 The Valley of the Kings, in ancient Egyptian, was known as, “The Great, Noble Necropolis of Millions of Years of Pharaoh,” or, more simply, “The Great Place.”

It was the burial place of pharaohs and many others in Egypt’s New Kingdom (18th-20th Dynasties). The Valley of the Kings lies on the west bank of the Nile (25°45′ N, 32°36′ E), across from modern Luxor. There are many valleys in the rugged Theban hills adjacent to the Nile, and there are several reasons why the Valley of the Kings was selected from among them as the site of the royal burials.

There are actually two Valleys of the Kings: the West Valley (WV), which is by far the larger of the two, in which were cut at least three royal tombs; and, immediately beside it, the much smaller East Valley (KV), in which over sixty tomb entrances were dug. The East Valley is the better known of the two.

KV 2, Ramesses IV: Type 3, 66m long; an ancient plan of this tomb is found on a papyrus now in Turin; never completely cleared, but accessible in Graeco-Roman times.

KV 5, originally a late 18th Dynasty tomb, reused by Ramesses II for at least three of his sons: largely inaccessible since then; unique, complex plan; clearance by the Theban Mapping Project began in 1989.

KV 13, perhaps tomb of Bay (under Tawosret): seriously damaged by flooding in 1994.

KV 17, Seti I: Type 2, one of the largest and longest KV tombs (over 230m, including an enigmatic passageway extending 90m beyond the burial chamber); dug by Belzoni (1817).

KV / WV 25, possibly begun for Amenhotep IV, although Tuthmose IV or one of his sons, Amenhotep III, Smenkhkare, or Tutankhamen have also been suggested: unfinished; found by Belzoni (1817) and only recently cleared.

KV 35, Amenhotep II: Type 1, 60m long; reused as one of the two caches in which priests of the 20th Dynasty reburied royal mummies; opened by Loret in 1898.

KV 42, perhaps intended for Hatshepsut, but never used by her; may have been used by the mayor of Thebes, Sennefer, and his family: Type 1; cleared by Carter (1900).

KV 46, Yuya and Tuya, parents of Amenhotep III’s wife, Tiye: they were buried at different times (Yuya first), and shortly after the last interment the tomb was plundered of valuable items, later robbed again, resealed in the reign of Ramesses III, robbed yet again and finally resealed by Ramesses XI; when found by Theodore Davis (1905), it still contained numerous artifacts.

KV 54, a small pit, in which embalming materials of Tutankhamen were buried: opened in 1907.

KV 55, this small unfinished tomb is late 18th Dynasty, but its attribution (to Tiye or Akhenaten or Smenkhkare) and true purpose remain hotly debated: cleared by Ayrton for Davis (1907). Amarna Cache.

KV 62, Tutankhamen: the most famous (and most carefully recorded) tomb in the Valley of the Kings; twice robbed, but nevertheless found almost perfectly intact by Carter in November 1922; still largely unpublished.

Ancient Society
Today is January 25, 2021, but in ancient Egyptian times it would be Rekh Neds 11, during the season of Peret -- which is a month dedicated to Amun-ra. Today is a Very favorable day.