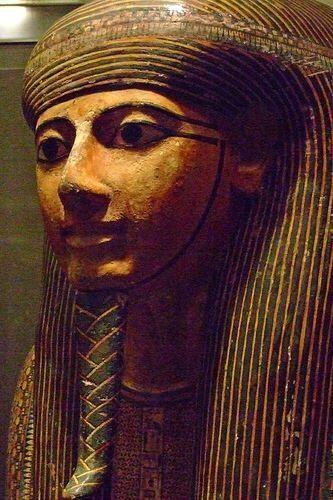 The tomb of Rameses XI, located in the southeast branch off the main wadi, was abandoned without being used for the king’s burial. The cutting of pillared chamber F and burial chamber J was left incomplete, and decoration was started only in corridor B, where a thick coat of yellowish plaster received preliminary sketches in red ink of Rameses XI with deities.

Menmaatre Ramesses XI reigned from 1107 BC to 1078 BC or 1077 BC and was the tenth and final pharaoh of the Twentieth Dynasty of Egypt and as such, was the last king of the New Kingdom period.

Three gently sloping corridors (B, C, D) lead to the well chamber E and pillared chamber F. From the ramped descent F, a short corridor (G) leads to burial chamber J. A deep shaft descends from the unfinished burial chamber J and its pillars are rectangular instead of square, with the ceiling between them vaulted. 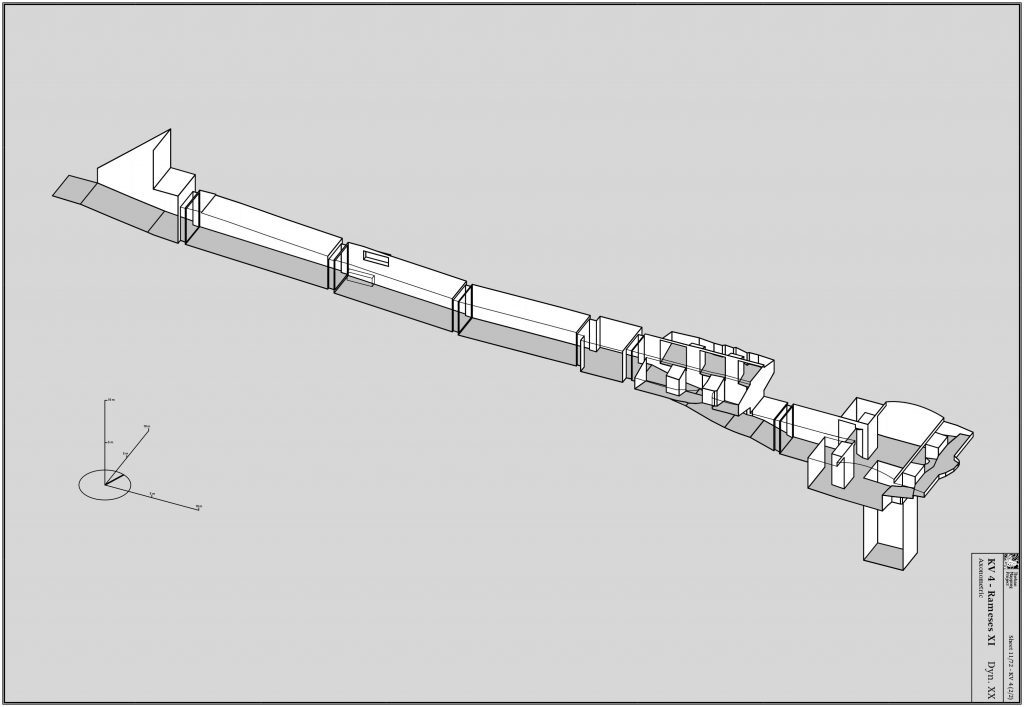 This is the last royal tomb cut in the Valley of the Kings. There is a deep shaft in burial chamber J. Although KV4 has been open since antiquity and graffiti from various ages attest to its popularity as an early tourist attraction it received little scholarly attention until John Romer’s clearance in 1978–1980.

Rameses XI was the last pharaoh to have a tomb built in the Valley of the Kings. KV 4 was never used for the king’s burial. Romer believes that during Dynasty 21 the tomb was used by Pinedjem I as a workshop when he refurbished the funerary material from KV 20 (Hatshepsut), KV 34 (Thutmes III), and KV 38 (Thutmes I). Pinedjem I added his cartouche to the wall decoration, but he did not use the tomb for his burial.

KV 4 has been open since antiquity, and its popularity as an early tourist site is indicated by the number of Demotic, Greek, Latin, Coptic, French, and English graffiti on the walls. The tomb was used as a residence during the Coptic period.

That KV4 was originally quarried for the burial of Ramesses XI is evident from the decoration in the corridor and the foundation deposits associated with the shaft. It appears however that this plan was abandoned in favor of a burial elsewhere (perhaps in Lower Egypt).

The most likely explanation for Pinudjem’s later restoration and the insertion of his cartouche would be that he intended to usurp the tomb at the beginning of his kingship, but this plan too was abandoned for an interment elsewhere, perhaps in the tomb of Inhapi (tomb WNA or possibly DB320) a tomb that was subsequently also used to rebury royal mummies from the Seventeenth Dynasty and the New Kingdom.

These abandoned burial plans are perhaps to be associated with the apparent general abandonment of the valley as a royal necropolis and the start of the restoration and reburial of earlier pharaohs during the Wehem Mesut period.

After Pinudjem’s abandoned usurpation of KV4, it appears the tomb was used as a workshop to process funerary equipment from other royal tombs, most notably the burials of Thutmose I, Thutmose III, and Hatshepsut. In this context, a link is made between the gilded gesso fragments found in KV4 and the coffin of Thutmose III that was found in the DB320 cache.

This coffin had been carefully stripped of the major portions of its gilded surface in antiquity and it has been suggested that this stripping was done in KV4. The fact that the individuals involved in these activities went through the time-consuming procedure of scraping of the coffin’s surface without impairing its basic function as a container for the king’s mummy, suggests this was not the work of common tomb robbers.

The material recovered from KV4 has therefore been interpreted as evidence for a changed official policy towards the burials in the valley in which they were stripped of valuable commodities in an attempt to safeguard them from tomb robbers by making them less attractive, while at the same time the recovered valuables were used to refill the depleted treasuries of the period.

During the Byzantine period, the open tomb was used by Copts as a residence and stable, while during the clearance of KV62 by Howard Carter in the 1920s it was used as a dining area and a storeroom, the latter during the early stages of that clearance before KV15 was made available for that purpose.

Conservation history: No conservation activities inside the tomb are known, but the Supreme Council of Antiquities has recently constructed a concrete and rubble retaining wall outside the tomb entrance. At present, an auxiliary diesel electrical generator is located outside the tomb entrance.
Site condition: There is no evidence of flood damage in KV 4. An apparent ancient repair was made to the lower edge of the overhang at the end of entryway A, consisting of a pair of beam holes for a supporting baulk. A large vertical crack runs through the center of the overhang and displacement slippage has subsequently occurred. Large cracks in the walls of the upper corridors have resulted in the loss of plaster and the wall surface, particularly in the first two corridors B and C.