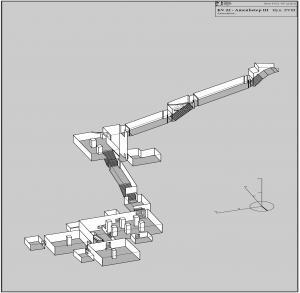 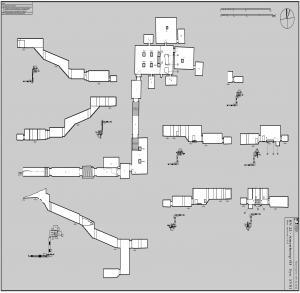 Noteworthy features: This tomb is the largest in the West Valley of the Kings. Two subsidiary burial suites, with pillar and side chamber, are located off burial chamber J. There is a pit for canopic equipment. The king represented with the royal ka is rather unique.

The tomb KV 22 was apparently initiated by Thutmose IV, as his name appears on the material in the foundation deposits. It was completed and decorated by Amenhotep III. It is possible that Tiyi and Sitamen were also to be buried here. The sarcophagus box was removed at some unknown time in antiquity, perhaps for reuse, although no trace of it has been found. The mummy of the king was moved to the cache in KV 35 during the reign of Smendes. There is evidence of intrusive burials, probably of the Third Intermediate Period, including fragments of a wooden coffin in the well.

Conservation history: The tomb was superficially cleared by Theodore Davis in 1905-1914. Howard Carter excavated more thoroughly in 1915. Over three seasons in 1989 and 1990, the tomb was re-cleared by Sakuji Yoshimura and Jiro Kondo of Japan’s Waseda University. Now, they are focussing on conserving and cleaning paintings on the walls and ceiling of the tomb.

Site condition: During the nineteenth century, unknown visitors to the site removed several paintings of faces from the walls and pillars, some of which are now in the Louvre. The paintings have been damaged by salt efflorescence. Cracks in the pillars have expanded.