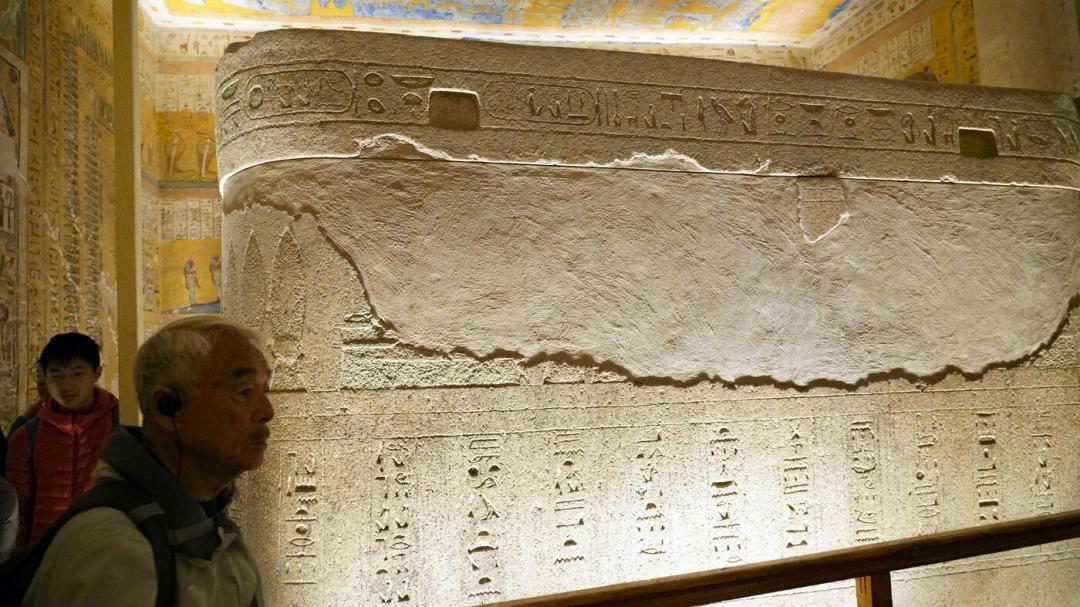 Tomb KV 1 was used for the burial of Ramesses VII. Usermaatre Setepenre Meryamun Ramesses VII was the sixth pharaoh of the 20th Dynasty of Ancient Egypt. He reigned from about 1136 to 1129 BC. 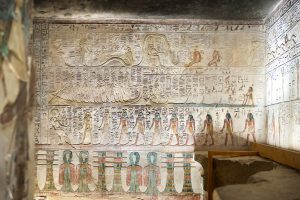 Although he was originally buried in KV1 when he died, his mummy has never been found, though four cups inscribed with the pharaoh’s name were found in the “royal cache” in DB320 (also known as tomb TT32) along with the remains of other pharaohs.

DB320 is located next to Deir el-Bahri, in the Theben Necropolis, opposite of the modern-day city of Luxor. It contains the last resting place of High Priest of Amun Pinedjem II, his wife Nesikhons, and other close family members, in addition to an extraordinary collection of mummified remains and funeral equipment of more than 50 kings, queens, and other New Kingdom members of the royalty, as it was later used as a cache for royal mummies during the Twenty-first Dynasty. 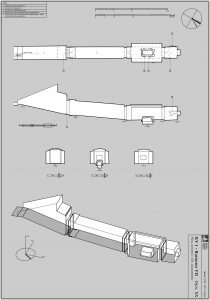 The entrance is cut into the base of a hill at the end of the first northwest branch wadi. This unfinished tomb comprises an open entryway ramp (A), corridor B, vaulted burial chamber J, and an unfinished chamber (K) with a rear recess. The walls are decorated with excerpts from the Book of Gates (chamber K), Book of Caverns (corridor B), Book of the Earth (burial chamber J), Opening of the Mouth ritual (corridor B), and the deceased with deities (corridor B, chamber K, burial chamber J). The ceilings are painted with motifs of flying vultures and astronomical figures. There are 135 Greek, and several demotic, Coptic, and nineteenth-century graffiti in the tomb, indicating that KV 1 has been accessible since antiquity.

Noteworthy features: The conversion of the second corridor to a burial chamber is noteworthy. Its central two-tiered pit in the floor, provided with canopic jar niches in the sides, is unique.

The figure of the king with the goddesses adorning the sun disk on the outer lintel of gate B is a first.

This is one of the latest tombs to be cut in a side wadi.

It was used as a dwelling by Coptic monks.

Site History: t the time of the king’s death in his seventh regnal year, work on the tomb’s third corridor (now chamber K) was abandoned and the second corridor was enlarged and became burial chamber J. A break in the end of the granite pit cover was made by robbers to gain access to the burial. The tomb was used by Christian monks or hermits as a dwelling.

Conservation history: In 1994, the Supreme Council of Antiquities cleaned the tomb’s walls and filled cracks in walls and ceiling with plaster. Some ancient graffiti was covered over in the process. In the same year, the Supreme Council of Antiquities created a walkway from the paved road to the tomb entrance and built a wood shelter with cement benches nearby. A wooden floor, railings, and large glass panels have been installed throughout the tomb.

Site condition: There are major cracks in the walls and ceilings of corridor B. The plaster is intact where it is not damaged by cracks, vandalism, or later graffiti. The paint is in good condition, although much blue pigment has fallen away.