Osiris is one of the most recognizable Ancient Egyptian deities. He ruled over the underworld and judged people before they could pass on to the afterlife. His name signifies power and might. He was one of the most important gods of ancient Egypt, along with his wife (and sister) Isis.

In ancient Egyptian hieroglyphs, the name Osiris appears as wsjr – although some suggest it might be ꜣsjr or jsjrj. Osiris is a Latin transliteration of the Ancient Greek Ὄσιρις IPA: [ó.siː.ris], which in turn is the Greek adaptation of the original name in the Egyptian language. In fact, most ancient Egyptian god names as we know them today are Latin transliterations of the ancient Greek name.

Since hieroglyphic writing lacks vowels, Egyptologists have vocalized the name in various ways, such as Asar, Ausar, Ausir, Wesir, Usir, or Usire.

Osiris was the first-born son of the earth god Geb and sky goddess Nut. Later on, he would marry his sister Isis and would eventually be killed by his brother Set. Together Osiris and Isis would have one child, Horus (The Younger).

At one point, Osiris and Isis watched over the Earth, making this a period of harmony and prosperity. However, by killing his brother Osiris, Set would plunge the world into chaos and disharmony.

When Osiris was killed, his wife Isis took over as the guardian of the underworld. Eventually, she managed to resurrect him. The story of Set and Osiris became the focal point of Egyptian religion, but also culture. It showcased the duplicity of men and warned people that immoral actions had consequences.

Osiris was not only the ruler of the dead but also the power that granted all life from the underworld, from sprouting vegetation to the annual flood of the Nile River.

According to experts, Osiris was initially a god of fertility. However, as he grew in popularity, he would absorb gods of agriculture and fertility, Khentiamenti and Andjeti. In most images, Osiris has a combination of green, brown, and black skin. These colors represent the soil and vegetation of the Nile River. The deity is also depicted as a mummy. This is an homage to his role as a Lord of the dead.

Osiris was the judge of the dead and the underworld, and the agency that granted all life, including sprouting vegetation and the fertile flooding of the Nile River. He was described as “He Who is Permanently Benign and Youthful” and the “Lord of Silence”.

When shown as a living god, Osiris is a good-looking man wearing the crown of Upper Egypt as well as a ceremonial dress. The god carries crook, flail, and atef in his hands, items held by the Egyptian rulers. He is sometimes associated with Bennu bird (which is a phoenix in Greek mythology) signifying his death and resurrection.

Like some other Egyptian deities, Osiris had a dark side to him. While most people praised and worshipped the god for his generosity and ability to provide plentiful crops, some feared him. His role as a Lord of the Dead would strike fear in many.

The experts still debate about Osiris’s origins. According to many, he stems from Syrian mythology. Due to his numerous roles, it is thought that the god was originally a spirit of vegetation, a Predynastic king, a mother goddess, a necropolis, or a jackal god. He was a local god of Busiris, in Lower Egypt, and may have been a personification of chthonic (underworld) fertility.

Some Egyptologists believe Osiris may have been a former living ruler – Yes, a real-life person! He could have possibly been a shepherd who lived during Predynastic times somewhere in the Nile Delta, whose beneficial rule led to him being revered as a god. The accouterments of the shepherd, the crook, and the flail – once insignia of the Delta god Anedjti, with whom Osiris was associated – support this theory.

Many have asked … is Osiris black?

It’s not an unfair question, as Osiris was called ‘the black one’ in various funerary texts and is sometimes depicted with black skin and in the guise of a mummified body. However, don’t be too quick to judge or think like a modern person because the ancient Egyptians didn’t always have the same concept of things like “race” as we do today.

Osiris could have been black, but he also could have been called the black one because black is the color associated with the alluvial silt deposited on the banks of the River Nile after the annual flood receded. And as the ancient Egyptian god of fertility, that has everything to do with the silt deposits along the Nile. The silt was fresh and fertile soil and it provided the ideal environment in which seeds for crops could germinate and grow. It was also viewed by the ancient Egyptians as being inherently magical and regenerative.

As I mentioned before, some think that Osiris may have been a real person who lived in Predynastic times, which could be anywhere from 6,000 BC to 3150 BC. However, it’s thought that he came from the Nile Delta region, which we call Lower Egypt, which means all the way at the top (far north). The Nile delta is the upper green area on this map. It’s where the river Nile spreads out and drains into the Mediterranean sea. 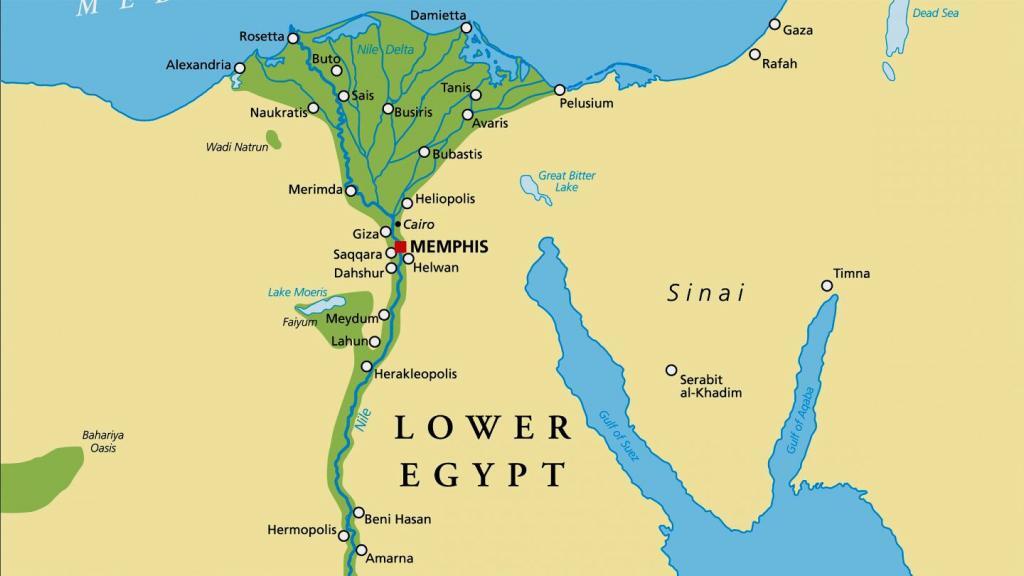 So you can’t argue that he might have been black because he came from the area we know today as Africa, but that isn’t the case.

Most often Osiris was depicted as a green-skinned deity with a pharaoh’s beard. This is what most people think of when they hear the name Osiris.